Exercise is important for humans and dogs alike, but it can only be effective if done properly. French bulldogs, unlike their English counterparts, are a more active breed, so they require some exercise in order to stay healthy. If you’ve recently adopted a Frenchie into your family, then read over our tips on exercising your pup. 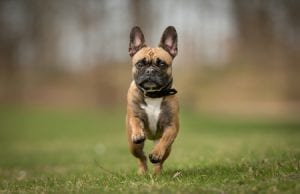 As stated previously, Frenchies are an active breed that require more playtime than most. At the very least, you should be exercising your Frenchie once a day, although twice a day (once in the morning and once in the evening) is even better. You can also break it up into smaller chunks throughout the day if that makes it easier on your schedule.

Each day that you take your French bulldog out to play, make sure you keep track of how long they’re out there for. You don’t want to overwork them, but you also want their daily exercises to be effective. To strike the right balance, keep an eye on your dog and watch out for any signs of fatigue. If your pup is starting to slow down, then it’s time to take them back inside. If it’s hard to tell, then the rule of thumb is to take your Frenchie out for a minimum of 15-20 minutes, and a maximum of 45.

Your French bulldog may be active, but they’re not a German Shephard. In other words, don’t expect them to run by your side for three miles. Because of their brachycephalic built (their flat faces and short noses), Frenchies will start to have breathing problems if they’re overworked. In that respect, you’re better off with a low-impact activity, such as walking around the neighborhood or playing fetch in the yard.

French bulldogs are a great addition to any family. If you’re looking to adopt one into yours, then contact Family Puppies today!