If you’re looking for a true and loyal companion that doesn’t bark a ton or need much exercise, then the French bulldog is for you. From their English roots, Frenchies were bred to be the ultimate companion, and that’s exactly what they are.

It’s no wonder that they’re the fourth most popular breed in the U.S. according to the latest AKC rankings! 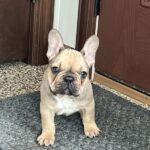 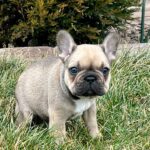 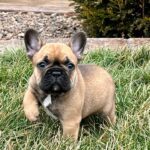 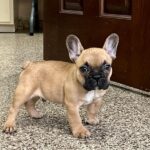 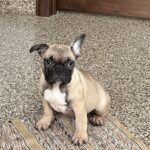 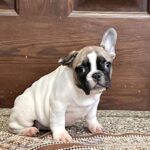 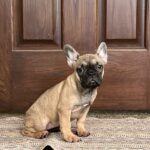 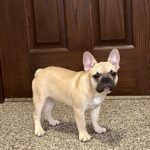 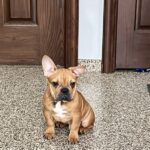 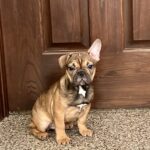 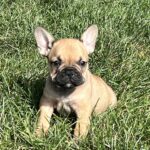 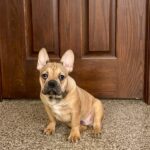 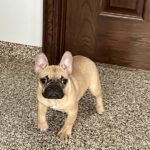 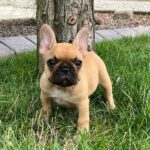 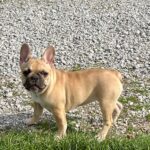 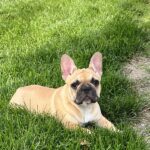 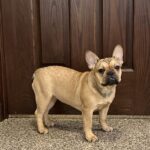 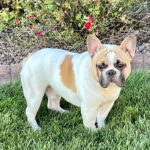 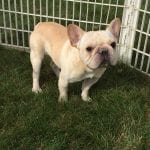 
As reputable French bulldog breeders in Indiana and surrounding states, our team at Family Puppies has been hard at work, learning more about the needs, personality, and training of this breed, so that we can better raise them and offer help and advice to their future owners.

Before you pick out one of our adorable French bulldog puppies, get to know the French Bulldog breed!

What to Know About the French Bulldog Breed

If you are looking for a sweet and intelligent puppy that loves people, then the French bulldog breed is exactly what you need.

French bulldogs are very easy-going pups and are considered the ultimate lap dog. They absolutely love being around their family, so much so that they’ll follow you around the house as you go through your daily routine without making a peep.

The French bulldog temperament is one-of-a-kind, switching from couch potato to an Indy 500 racer.

Just as long as they’re spending time with you, they’re quite content. French bulldogs are freethinkers and will do what they want, which can sometimes help or hinder their training.

All Frenchies have distinctive black lashes, lips and ‘eyeliner’ around their eyes. There are other French bulldog colors like black and white, and blue, but those coat colors are not recognized by the AKC.

This breed is sensitive to heat and prone to breathing issues due to the structure of their signature wrinkled face.

So keep an eye on the temperature of your home and pay close attention to your pup when you are playing in the sun or getting in that 15-20 minute daily walk on hotter days.

What to Expect Living with French Bulldog Puppies

French bulldogs are considered one of the best indoor dog breeds and best dogs for apartment living.

They love playing and going on walks, but they aren’t a very active dog which is perfect for apartment dwellers.

One minute they’ll be resting on the couch with you and the next you’ll see them running laps around the house with their short, but powerful bodies (not for long though since they’re such low energy pups).

Your Frenchie is all about human contact and it’s very easy for them to form a bond with both people and dogs, so visitors are always welcome and socializing with other pups is a must.

Frenchies generally sleep for about 12 to 14 hours a day when they reach maturity, but as a pup, expect up to 18 hours a day.

Preparing for your French Bulldog Puppy

As soon as you bring your French bulldog puppy home, you’ll immediately get into training your pup in the ways of the house, crate and potty training.

You’ll have an easy transition bringing your pup home, as long as you prepare for your French bulldog puppy the right way!

Since this breed is full of free thinkers, they can be a bit stubborn when it comes to training.

However, with time, patience, and a few expert French bulldog puppy training tips, you shouldn’t run into any trouble.

Before you buy, it’s all about finding the right breeder that has quality puppies from excellent parents.

With research and loving commitment, we as Havanese breeders, Coton de Tulear, and French bulldog breeders in Nappanee, Indiana, have been able to raise some of the most outstanding pups.

Our beautiful French bulldog puppies are bred with the utmost care and are raised in a loving environment until they’re ready to go to the perfect forever home.

As the owners of Family Puppies near South Bend, Ft. Wayne, Indiana, and Chicago, we are dedicated to providing the best Havanese puppies, Coton de Tulear and French bulldog puppies to wonderful families who will love and care for them.

Family Puppies takes great pride in our French bulldog puppies for sale in Indiana and would love to help you in deciding which puppy is right for you and your family.