You love French Bulldogs and have been dreaming of adopting one of your own someday. However, you also have kids, and you’d like to know if a French Bulldog puppy will get along well with your children. Well, don’t worry. Frenchies are great with kids, and they’ll quickly become a loyal companion to everyone in your family. Here are a few reasons why: 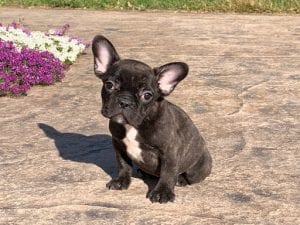 Depending on how young your kids are, you’ll likely have to get a dog that can put up with a lot. After all, you don’t want a dog that snaps at your kids if they accidentally tug on their tail or ear. French Bulldogs, however, are extremely docile and easy going. They even received a 96.2% score from the American Temperament Test Society, making them one of the most evenly tempered breeds around.

Frenchies get attached to their families, and as such, they become very protective. You’ll never have to worry about your children being in danger around your dog, as a French Bulldog will do whatever it takes to keep them safe.

French Bulldogs were bred to be companions

Unlike other breeds, Frenchies were bred to be companions rather than workers. They were typically the companions of upper-class French women before becoming more popular in other countries. This makes them extremely affectionate, friendly, and very lovable lap dogs with everyone in your family.

Since Frenchies were bred as companions, they’re naturally more sociable than other breeds. They will love playing and cuddling with your children. In fact, coupled with their protectiveness, they’re almost like a babysitter (although we wouldn’t recommend leaving them alone for too long). Just be aware that this desire for interaction can lead to separation anxiety when the family isn’t around.

French Bulldogs will be one of the best friends your children will ever have. If you’re looking to adopt one into your family, then contact Family Puppies. Located in Nappanee, IN, our French Bulldog puppies will be a great addition to any family!